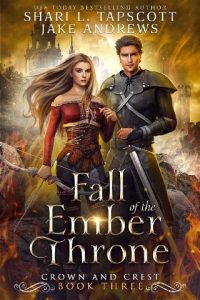 The princess is evil, and the king is dead.
After leading an indulgent lifestyle, Prince Lawrence is suddenly poised to ascend the throne, with Lady Clover at his side. Clover’s goal of claiming a crown appears to be moving forward as planned, even though it’s a life she no longer wishes to pursue. She finds herself trapped between responsibility and love, desperately missing the commander who claimed her heart.
Meanwhile, Henrik is in Ferradelle, under the rule of a vicious princess who has declared herself queen of the High Vale people. With magic at her side, it seems no one can stop Camellia from taking over all of Caldenbauer.
War appears to be inevitable, unless Henrik can discover the root of Camellia’s power and escape the swamp island to deliver the information to the soon-to-be king. The fate of the entire kingdom rests in the commander’s hands, but Camellia will do everything in her power to thwart his plans.
And time is running short. As Lawrence’s coronation draws near, so does a royal wedding—one Henrik is determined to stop…