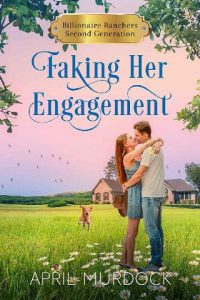 A jealous sister. An impulsive declaration. A big mess.

Ashlyn Bolton has always looked up to her big sister. When she announced her engagement, though, something boiled up inside Ashlyn that she couldn’t control. Jealousy. She reacted quickly and announced that she was getting married, too. This was a big lie.
Cole Bridger loved his job as a ranch hand. He was good at it. He had aspirations of earning more responsibility at the Bolton Ranch. All he needed was for his boss, Ashlyn’s father, to notice his work.
The only person who came to mind when she declared her own wedding plans was Cole. They were friends and she hoped he’d go along with her. She also hoped he wouldn’t be mad.
Cole couldn’t believe Ashlyn had made such a ridiculously bad decision. This news hurt a little more than anyone knew – he’d had a secret crush on Ashlyn’s sister forever. Her engagement was a kick in the gut. Being backed into a corner by Ashlyn was insult to injury.