Home
contemporary romance
Fade Into You by Elle Greco (ePUB) 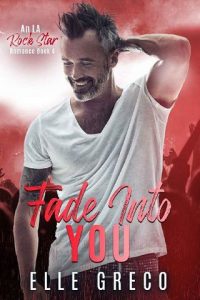 It’s all fun and games until someone falls in love.

Six years after the cops found Ear Assassins’ lead singer dead of a drug overdose, his widow Lydon Johnson has only just begun to pick up the pieces. Now she finds she’s fast running out of money to support herself and her son. A reality TV show is an unappealing means to an end, but in the interest of keeping a roof over their heads, she signs on. But the producers soon find out, Lydon’s kind of boring for a rock and roll widow.

Vince Davis, lead singer of Anthem, is a rock and roll legend two decades in the making. But when the head of his longtime record label is exposed as the cause of his son’s drug overdose, his attempt to split his band from the label comes with a personal cost that he’s not sure he’s ready to make.
Enter Lydon. Vince has an idea to spice up Lydon’s flailing reality show: pretend to be lovers. Thrust back into a glowing spotlight, can Vince’s amped star power get Anthem out of their contract on his own terms?

The reality TV producers think it’s a match made in rock and roll heaven. What could possibly go wrong?
When you hate the person you are supposed to fall in love with, LOADS.