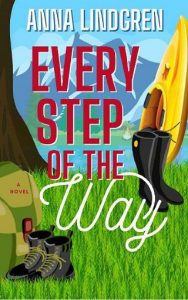 When Jake Davis arrives home, he is expecting to be met by a sea of familiar faces-not Cammie Anderson’s glare and two middle fingers. She’s a newcomer in town, and Jake…well, he’s as close to Smuggler’s Cove royalty as one can be.
Jake is confident in his ability to capture the attention of any woman, but Cammie couldn’t be further from interested. She is convinced her fiery personality will ward off unwanted attention, but will her walls withstand the strength of Hurricane Jake?
The most impulsive decision Cammie ever made was moving to Smuggler’s Cove to become a kayak tour guide. She quit her job, left her cheating ex, and moved to the tiny, remote town in Alaska.
After falling in love with the adventure, the pristine landscape, and the loveable, quirky characters who seem to brighten even the dreariest of days, she ran into-or was nearly run over by-Jake Davis, the man who was at the helm of Cammie’s near-death experience.
Cammie has learned the hard way that the people we think we need most in life are the ones who ultimately disappoint us. No matter how hard Jake Davis tries to prove her wrong, she’s determined to not let history repeat itself.
But one thing is for certain. Jake Davis is a storm that never ends.