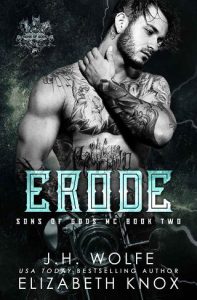 Thix:
I’ve lived my life in the dark since the very day I was born, but that’s what happened when you’re abandoned in front of a fire station at two days old. I was put into the state system and eventually after no interest, I was transferred to an orphanage. It’s where my life became hell until I was old enough to age out of the system. Since then, I’ve made a life for myself.
It wasn’t easy, but I did it. I persevered, went through some tough shit, and made it through.
I assumed I wouldn’t have any more tough conflicts in my life, but the moment the Sons of Gods MC made it their mission to knowingly keep the truth from my best friend, I lost it. I told her the truth and while I know the club’s intentions were good, I couldn’t let them lie to her. Not when she’d already been through so much.
Only, as I stood up for telling the truth to one of my friends, I was faced with a hard decision with another: keep my growing relationship a secret, or tell Gemma I was sleeping with her brother.
I didn’t want to lose her, and I didn’t want to lose him.

Pan:
I never intended on being with Trix, but she was a spitfire I couldn’t keep my hands off. She pushed me at every point and argued with me just as much. She was a woman who didn’t bend her will to appease others, and I respected that the most about her.
We went from hating each other for a while to being each other’s resident bedmates. I couldn’t imagine another woman in my bed and I didn’t want to.
At the same time we were creating something between the two of us, things with the club were blowing up. Our Prez was shot, the man responsible evading us at every turn, and our sales were down. We all knew who was responsible for it and we just had to find him.
We’d find him one way or another, and when we did, the entire club would have vengeance for what he did. I don’t know who’s a bigger threat: Thorn, or Gemma.

***The Sons of Gods MC is a darker mythology-themed MC series by J.H. Wolfe and Elizabeth Knox. This series is not paranormal romance. These books are intended for mature audiences only (18+) and do go over triggering subjects. Please proceed with the utmost caution.