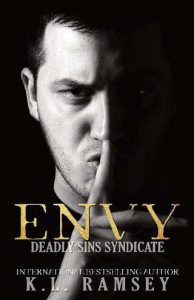 Finnigan Envy never cared about what people thought of him. He didn’t care what his friends and family thought about him being bisexual, but it wasn’t something that he advertised. He found that people’s comfort levels with him depended on his silence, and he was done being quiet. Especially since he found two people that he finally wanted to be with—a makeshift couple who knew him a little too well. Ella Laxton and Jett Greed were the perfect couple and when they invited him into their relationship, he knew that taking them up on their offer was a mistake, but he couldn’t help himself.

Finn didn’t like to play games—he hated them. When Jett and Ella tried to play him, he walked away. It wasn’t easy to turn his back on the two people he wanted so badly, but it was necessary. Giving them another chance wasn’t something he should have ever considered, but the pair of them made it pretty tough to tell them no. He’d play with them, take what they were willing to give him, and then he’d walk. It was his go-to, who he was, and in the Deadly Sins Syndicate, creatures of habit were the ones who stayed alive—and that was his plan.

To stay alive at all costs, even if he’d have to pay the price with his heart.