Home
contemporary romance
Entwined In You: As Told By Carter Cole by Ashlee Rose (ePUB) 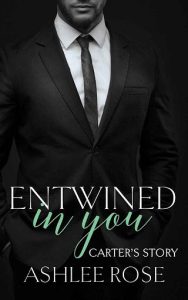 Entwined In You: As told by Carter Cole by Ashlee Rose – Free eBooks Download

All Three Of Carter’s Stories now in one Boxset!!

BEFORE HER
See ‘Something New’ through the eyes of Carter Cole.
His father told him not to fall for Rylie. His friend warned him to steer clear of her, and when Rylie broke his heart he vowed to himself that he would never fall in love again.
He had his flavours – they were more than enough for any man. Until Freya Greene.
Before her Carter didn’t think anything was missing from his perfect life, but she made him question everything.
Because of her he realised it was time to try Something New.
18+ due to the nature of the book,

WITHOUT HER
See ‘Something To Lose’ through the eyes of Carter Cole.
After leaving Freya, the love of his life in the arms of Jake he spiralled into a black hole. Watching her get smaller in his rear-view mirror, the hole in his heart growing bigger. By the time he realised the mistake it was too late to turn around. His pride wouldn’t allow it.
He spent a year trying to get over her, a year trying to contact her but after pouring his heart out into a letter and getting no response he knew it was time to bury his feelings for Freya.
For now.
Chloe waltzed into Carter’s life just at the right moment, swooping him up when he needed it most. The therapy he craved. She knew the deal when it came to Freya.
Then it happened, a trip to Paris, two lost souls entwined so deeply in each other find one another.
The world stops, it’s just them, two pulses racing once more.
Will it be really any different than before or will there be something more to lose?

FOREVER HER
See ‘Something Everlasting’ through the eyes of Carter Cole
After finding out he is a father to a child he never knew about with an old flame, Freya and Carter’s world changes, but only for the better.
Just as normality settles in, a mysterious man enters, determined to turn their world upside down with one simple fact.
But it can’t possibly be true, can it?
Carter struggled with this new piece of information changing everything he thought he knew. Trying to push past, the man returns to take what’s his.
This throws Carter into a spiralling turmoil where feelings that he pushed far down resurface.
Does heartbreak and truths consume Carter and Freya once and for all?
Or will she forever be his?