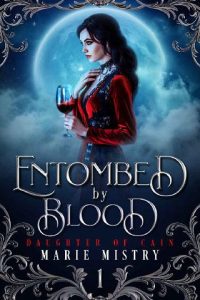 I was my sire’s greatest warrior. The most powerful vampire Cain had turned in generations. His most beloved daughter.
But I was tricked.
Someone framed me for a betrayal so great that my sire chose to punish me by burying me in a silver coffin. He left me there to rot, until I was driven mad by thirst.
Until I broke.
A hundred feet down they buried me. In a place so deep that most people forgot I existed. Until almost two centuries later, when my sire has need of me once more.
But I’m not who I once was. I’m shattered. Weak.
To keep me in line, Cain forces me to take a pack of warriors as my thralls. They’re my jailers and my carers; responsible for feeding me and teaching me about this new, modern age. Between a vampire, two lycans and a hybrid, there’s little chance of my escaping.
But my thralls have secrets of their own, and I’m about to get caught up in their plans whether I want to or not. The only question is, will I fight with them, or against them?