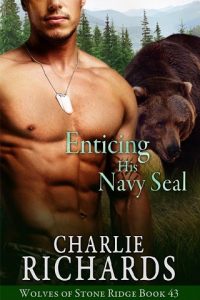 Out of the Cage: When an old bear shifter makes an unexpected discovery, he must rely on new friends to secure his future.

When a Shifter Council hearing proves corruption on the council, Councilman Regales Colearian takes it as a personal affront. Deciding to take matters into his own hands, he handles all grievances himself. That includes going to Stone Ridge to meet the shifters impacted by the scientists the wolf pack has been fighting against. Once there, he runs across the last person he ever thought he’d meet–his mate, Armand ‘Theodore’ Conway–who happens to be a human male. Regales learns that Theo knows about paranormals, but has no interest in bonding with one. Theo is a navy seal and has seen so much depravity he feels tainted by it. Plus, Theo isn’t gay. While Regales has never considered himself gay either, at over four hundred years old, he’s been alone a long, long time. He knows claiming Theo will turn his life upside-down, but it’ll be worth it. Stepping out of his own comfort zone isn’t easy, so can Regales manage to convince Theo to give a stuck-in-his-ways bear shifter a chance?