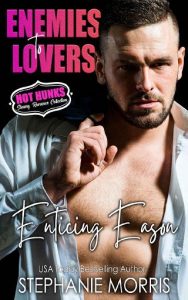 Eason Pruitt knows he’s asking for trouble when he purchases office space next to Harmony Douglas. Not only are they sworn enemies—they’re also business rivals. He’s a wedding planner who moonlights as a matchmaker and she’s a divorce attorney—the one who raked his brother over the coals. Despite her dislike for him, he fell for her on the spot…making him the crazy one. But the heart wants what it wants. Until an unexpected baby is delivered to him with a note claiming he’s the father and now he needs her help.

Harmony Douglas doesn’t believe in love. That’s why she’s one of the best divorce attorneys in the city. Having her rival move next door to her just reaffirms that Eason Pruitt is as much of a jerk as his brother, regardless of the charm he turns on full force. Next thing she knows, chemistry overrides logic. But when a baby bearing his features and a letter claiming he’s the father is left at her doorstep, she knows the first opinion is always the best. So why can’t she say no when Eason asks for her help? Because seeing him take on the new challenge of fatherhood breaks down the wall she’s built around her heart. Just when her outlook on love and marriage start to change, his ex-girlfriend returns, reminding her that there’s a thin line between love and hate.

A look. A judgment. A string of words. Bitter rivals and sworn enemies have been around since the beginning of time. But make no mistake, once the spark is ignited and the fuse is lit, the fine line between love and hate will go up in flames. So stand back or cross over, but be prepared to strap in for the ride.