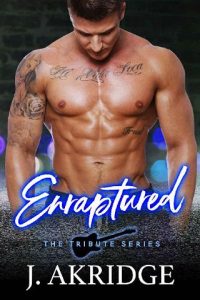 What happens when Finn is forbidden from the one girl that has captivated his attention from the start?
He breaks every promise he’s made.
Finn’s the playboy of the group, but his past mistakes have rocked the band and left his bandmates weary of his actions.
One drunken night was all it took to give his heart to the one girl that held the biggest secret.
Jolie has a past she’s running from. With a new identity, and a city she’s never been to before she’s shocked when she lands a job that may be perfect to keep her on the move. She’s been told the playboy drummer is off limits, but she can’t resist him for long.
One picture of the two of them is all it took for her ex to find her. Now she’s forced to share her deepest secret with Finn, and hope it won’t push him away.