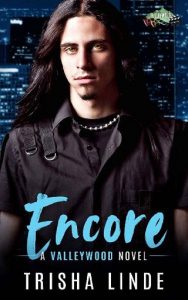 Everyone deserves a second chance. Unless, of course, you leave your true love at the altar… then you deserve to be cursed.

Omega actor Kai Carroll has it all: money, fame, popularity… everything except love. He was betrayed by the man he thought was his true love years ago, and he swears he will never love again. When the tabloids explode with scandal, Kai finds himself kicked to the curb. Jobless, friendless… unless you count the borderline harassment he gets from his number-one fan—which he doesn’t. Turns out, the perfect life he worked so hard for is nothing more than a mirage. When his agent calls with a mysterious offer to act in a play in Valleywood, he has no choice but to accept the role. What does he have to lose… right?

Alpha shifter Daniel Agassi lost everything eight years ago, and he swears he doesn’t know how it happened. There he was, just minding his own business, living his best life, when out of nowhere—BAM!—he found himself stuck in his cat form. He couldn’t shift back to tell his true love, Kai, that he never intended to leave him at the altar. And since then, he’s been trapped, without any way to send word. Instead, he’s been a pissed-off pet for almost a decade. When the spell is finally broken, his only goal is to reconnect with Kai. The only problem? The omega is no longer the man he used to be. Then again, the same could be said for Daniel.