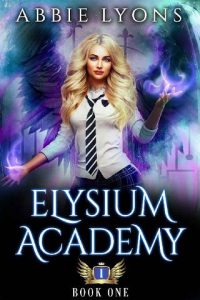 Elysium Academy isn’t safe for a girl like me.
My brother dies, my apartment burns down a week later, and a mysterious letter tells me I’m a “guardian”?
Yeah, sure. I might be blonde, but I’m not stupid.
Because let’s get this straight: I don’t believe in magic, but I don’t believe in coincidence either. So I’m getting to the bottom of this.
Scott basically raised me, and his death just doesn’t add up. I’m going to find the truth, even if I have to enrolled at some place called Elysium Academy to do it. Now I’m taking classes like “Protective Magic 101,” playing magical sports, and learning from literal cupids, all to figure out what happened to my brother.
The only thing in my way? Marius, the blazingly hot leader of the mysterious Order of Eden.
Turns out crashing the midnight parties hosted by the elite societies is frowned upon. And for someone who’s supposed to protect humanity, Marius has got a hell of a dangerous edge. He’s intense, commanding, and has a violent streak, and I can’t seem to stay out of his way–because he’s dating my roommate.
I need to find the truth and get out, but the reality is more complicated than I imagined. Scott might not have been who I thought he was, and my presence at Elysium might be because of a huge mistake.
Because I’m not a guardian after all. I’m human.
And as good as dead if the Order finds out.