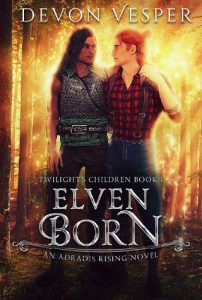 The world has become one of terrible beauty and endless possibilities. For a human widower and an elf who has given up on finding a mate, that magic is about to bring them together.

Mother Earth has awoken and decimated the humans who have been killing her for millennia. Those who survive are under the care of the elves, but someone—or something—is hunting them. So when a mysterious elf appears in the nick of time to rescue John, it all seems a little too convenient to be believed.

Refusing to let the humans’ distrust stop him, Elan stays to help John through his recovery, taking care of his children and growing close to the little family by the day. When elf and man enter into an impossible soulbond and John barely survives, Elan takes his new mate and his children back to the Summerlands. He wants to help the remaining humans from the evil that stalks them but needs his family safe first.

But when danger strikes, it comes from a place they least expect. Jealousy, anger, and unexpected allies abound, and it’s a race against time for Elan to save the humans he’s come to love. With the children in peril, if he fails, Elan will lose everything that makes his long life worth living.

Elven Born is the third installment in the Adradis Rising series. This book was previously published under a different title and pen name in another genre. It has undergone extensive edits from its original version.