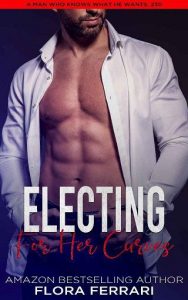 Electing for her Curves by Flora Ferrari – Free eBooks Download

Being the only daughter to the Mayor of our sleepy little town seems complicated enough.
Now that I’ve finished college it’s a full-time job supporting my dad in his upcoming campaign for re-election.
But complicated doesn’t begin to describe it.
For the first time ever, dad has a genuine opposing candidate. Nothing too shocking about that, it had to happen at some point.
But once I see not just who it is, but what he is, I’m done.
Pop my timer, baste me in my own juices and turn me over.
I. Am. Done.
Finished.
James Silverthorn is a freaking god.
If I ever get close enough to meet the man in person, I know I’ll just die.
An older guy like that, actually falling for a younger, thicker girl like me?
It’s about as close as I’ll ever get to a real man, even just being in the same town.
But the fantasy I have in my mind, makes a river look dry.

I have my doubts. Moving from the city to some middle of nowhere town famed for its lumber and popular Mayor.
Giving up my role in managing a successful string of very successful businesses.
But once I see the public channel broadcast late one night after a layover flight.
Once I see her.
Krystal Newland. Daughter and campaign manager for the small town Mayor’s campaign this year, I know exactly where I’m headed and why.
A younger girl like that, falling for an older guy like me?
I don’t know for sure, but I’ll risk everything I have to stake my claim.
The thought of any other man, anyone even breathing the same air as her.
I can’t get to the sleepy town of Woods End fast enough.