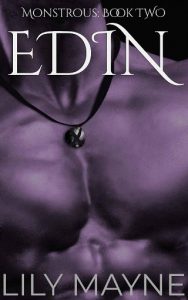 I was just a boy when the monsters rose on earth, forcing humans to flee to the coastlines and live in cramped, dirty, military-controlled cities. I enlisted as soon as I could to escape.

Now, I’ve been in the military for twelve years and have the scars—and missing body parts—to prove it. As a hardened soldier who’s spent his fair share of time out in the Wastes—the dangerous place where monsters roam free—I didn’t think anything could surprise me anymore.

But then circumstance forced me together with a big, annoying purple monster who’s arrogant and bossy and pushes all my buttons in the worst—and best—ways. I need his help, and I hate needing anyone’s help. But the more time I spend with him, the more I realise that maybe there’s more from him that I need. And that he might need things from me too.

But I’m still a soldier. I still have responsibilities. It doesn’t matter how I feel about Edin, because we can’t be together. It’s too dangerous.

That doesn’t stop me wanting him, though.

Edin is Book Two of the Monstrous series, a post-apocalyptic m/m fantasy series that focuses on monsters and human men falling in love. It is best to read the series in order. Warning: This m/m love story contains explicit content and is not suitable for young readers. It also contains graphic depictions of torture and violence, and mentions PTSD.