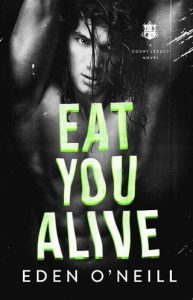 Vicious.
Vengeful.
Prick.
Ares “Wolf” Mallick has it out for me. He’s one of four self-imposed gods at Pembroke University, and unfortunately for me, I was on his radar well before that.
He single-handedly blames me for ruining his junior year of high school, and three years later, he’s come to collect. He says I owe him. He says he owns me, and he’s determined to destroy everything I’m working toward unless I bend to his will.
Dirty.
Rotten.
Faker.
It seems Ares is in need of a fake girlfriend. He says he needs a shield to keep his fangirls off his jock, and apparently, I fit the bill. He wants someone he can control and gives very few details beyond the initial ask.
Let alone where he was for most of last year.
It appears the big bad wolf has secrets, and he intends to use me to execute his schemes. If he wants someone he can control, though, he’s howling in the wrong place. I don’t break easy, and this phony relationship may prove to be just as much of a nightmare for him as it is for me. Ares “Wolf” Mallick and I can’t stand each other. So why, regardless of whoever’s watching our “fake” relationship…
Are we both having such a hard time keeping our hands off each other?