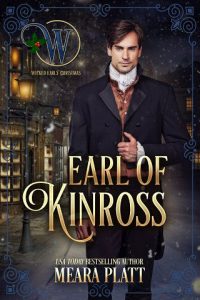 Marcus Brayden, Earl of Kinross, thought fighting Napoleon on the battlefield was dangerous. But it is nothing to the upheaval caused by Lara Le Brecque, his best friend’s sister, when she climbs over his townhouse wall shortly before Christmas and attempts to sneak into his London home. Lara ought to be on the marriage mart, enjoying her London season and the holiday festivities, but when she confides the Le Brecque family problems to him, he knows he must do all he can to help…even if it means marrying Lara.

Lara Le Brecque is facing another difficult Christmas with her family in disgrace and under threat of losing all their holdings. Lara has no one else to turn to but Marcus Brayden, who has just returned home from the Napoleonic War and been awarded the Scottish earldom of Kinross for his heroism in battle. With her father under house arrest and suspected of treason, and her brother condemned as a pirate and a murderer, she must expose the villain behind this plot to destroy her family and needs Marcus to help her bring this culprit to justice. Marcus has told her to hide in his rooms at the Wicked Earls’ Club if ever she is in danger, but as she finds herself falling in love with Marcus, she realizes the greatest danger of all is to her heart.