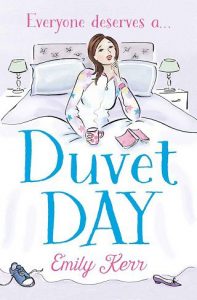 Young lawyer Alexa Humphries’s one true love is her precious duvet, yet she is torn from its comforting embrace every morning while the foxes are still scavenging the bins outside and doesn’t get back until long after most normal people are already asleep. Worn down by the endless demands of her suspicious boss and her competitive, high-flying housemate and fellow lawyer, Zara, Alexa barely recognises herself anymore. This wasn’t how life was supposed to be.

But today is different. Today, Alexa just cannot get out of bed to face the world. Everyone deserves a duvet day, don’t they?

But what starts as a mini-rebellion against the tyranny of her job soon sees her locked out of the flat wearing nothing but a unicorn onesie and what’s left of her dignity. Desperate to track down a spare set of keys before her back-stabbing housemate finds out she’s pulled a sickie, Alexa sets off on a wild goose chase across London. Before long, she’s being blackmailed by an annoyingly handsome photo-journalist, forcing her to trail after him while the hours before she has to get home tick down.

As Alexa’s dreams of N-flix and self-care turn into the duvet day from hell, what’s starting to feel a lot like the beginning of a breakdown might actually be the making of her. Will she get