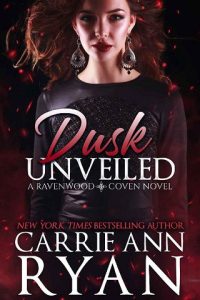 Bestselling Author Carrie Ann Ryan continues her magical paranormal series where a town keeps its secrets, but an aging curse might just be their downfall.

The Christopher curse is one of legend—so old that every new generation knows they will be touched by it. With every spell muttered, every magical pull needed to save her town, Laurel Christopher knows she’s one step closer to burning to ash and leaving those she loves behind. She’ll fight with all she has to protect her people—and the man she loves—but she might not have enough strength remaining to save herself.

Jaxton Dark lost his best friend to the necromancer attacking Ravenwood but refuses to lose his mate to a curse that could take them both. He’s well aware of the loss calling them, but before he can stand up for those he loves, a betrayal cuts him to the core.

Sacrifice was always an inevitability when it comes to the curse that threatens their fate. Yet it’s only when the darkness makes a subtle and surprising move that star-crossed lovers, Laurel and Jaxton, will truly find out the meaning of who they could be and what they must give up to survive.