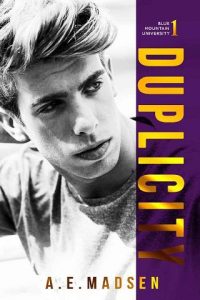 Daniel
When my ex outed me, he also lied about our relationship, and everything changed. Now, I’ve been effectively disowned by my parents, and I haven’t dated anyone in almost nine months since. According to my friend, that’s too much time to waste regretting the actions of a good for nothing jerk. Part of me wants to get back out there, but I’m not sure. She insists on setting me up on a semi blind date with her old study buddy. But when I run into him on campus, he isn’t anything like she said.

Ian
I can count the number of people that I’ve told I’m bi on one hand, make that one finger. I’ve never been the out and proud type. So, when Daniel approached me nervously asking about a date, I was a little surprised, but I was also on my way to soccer practice and had no time to think it through. I gave him my number so we could meet up later and we went on a date the next weekend. It was great, and he kissed me when we were saying goodbye. Then he called me Aiden. That’s my brother’s name. Did I forget to mention I’m a twin?