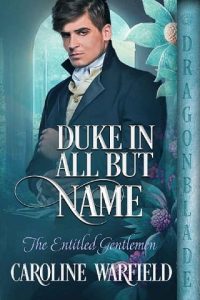 Secrets and lies threaten to pull them under, but a forced marriage may be their salvation.

Gideon Kendrick grew up as the despised bastard son of the Duke of Glenmoor. Exiled to the mines by his father, he has not only survived but thrived and prospered. He lives apart, wanting nothing to do with the duke, the estate—or anything in his past, except his younger brother Phillip, the new duke.
When Phillip disappears, leaving behind a letter asking his brother to care for his affairs, Gideon can’t refuse. Armed with authority making him the duke in all but name, he returns to the scene of his worst memories, facing vicious rumors and his family’s past. He also finds a grasping would-be heir, a steward with secrets, and a woman who stirs in him a desire he thought buried with his beloved wife.
Mia Selwyn lives in the shadows, an unwanted poor relation in the house of her viscount uncle. When her cousin’s hoydenish attempt to meet the supposed heir sees her drenched, ill, and in need of nursing, Mia is sent to care for her. Though warned to stay clear of the despised Kendrick, she is drawn into the dark undercurrents among the mismatched collection of residents and enthralled by the enigmatic Mr. Kendrick.
She quickly realizes he is not the monster he is rumored to be, twisted in body and mind. Instead, he is a resilient resourceful man with a deep love of family. As family, household servants, and villagers take sides on whether Gideon is the source of all the estate’s problems or its salvation, Mia and Gideon forge a partnership.
Together they struggle to unravel secrets and the tangle Phillip left behind, and in the process, find a future for themselves.