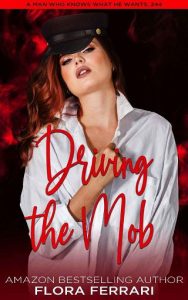 I’ve had a crush on Murphy Moran forever. He’s the leader of the Irish mob, a forty-two year old man with steel hair and a bodybuilder’s physique.
He’s also my dad’s best friend.
Dad and I have been in England for the past three years, but now I’m home and, as a favor to Dad, Murphy has given me a job as his driver.
I dream of racing cars one day, but this chauffeur job has my heart racing instead.
I don’t expect him to look twice at me. I’m just a shy virgin, over twenty years younger than him, with nothing to offer him. My crush isn’t going to turn into reality.
But then this billionaire alpha makes his move, and nothing will ever be the same again.
Amidst a war with the Cartel, keeping secrets from my Dad, and falling deeper and deeper under Murphy’s spell, this has got to be the most eventful new job ever.
Can our closeness survive, or is it all going to come crashing down?

*Driving the Mob is an insta-everything standalone instalove romance with a HEA, no cheating, and no cliffhanger.