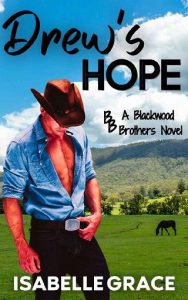 Drew Blackwood had plans for his life. Becoming a father in six months wasn’t one of them.

At first glance, veterinarian Drew Blackwood has it all. Rugged good looks. Charming personality. A successful career where his veterinary expertise is sought-after all over the country. A coveted partnership offer at one of the most prestigious equine facilities in Kentucky. And he’s going to be a father.
So, what’s the problem?
His baby mama, fellow veterinarian, Hope Logan. The irresistible beauty Drew’s been in lust with for over five years but who has effectively kept him in the friend/coworker zone by adamantly insisting her professional and personal lives must remain separate.
Good plan until a devastating turn of events leads to one incredibly, but totally unplanned night they spent together. Though Hope makes it painfully clear the next morning nothing has changed between them, the pregnancy test, a few weeks later, says otherwise.
If that weren’t enough, his grandfather beckons Drew home with hopes he’ll stay and join his veterinary practice like they’d originally planned. Now faced with two partnership offers, impending fatherhood, Drew’s growing feelings for the mother of his child, and her hints toward considering adoption, Drew can only think of one thing to do – invite Hope to come with him for the holidays. And do whatever he can to change her mind.