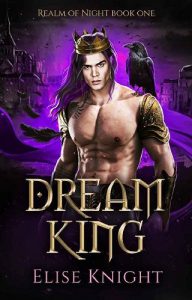 He controls dreams. Now the Dream King wants to claim me as his own.

When everyone in the world fell asleep at exactly the same time and woke up a week later, the world believed it was the start of a rampant plague. They didn’t know the half of it.
Working in a sleep clinic is hardly the career of dreams, (pun intended) but when the world falls prey to a weird sleeping sickness, my job suddenly becomes ridiculously busy. Not that my asshole of a boss would think to give me the pay rise I deserve. In fact. My life can’t get any worse. My bank account is empty, my ex is hooking up with his boss and watching old people sleep is seriously dull.
That is until a lethally sexy freaking brute of a man appears in the sleep study and accidentally drags me into the dream world. A world that he owns and rules over.
The dark and brooding jerk doesn’t want me there, but I’m staying whether he likes it or not if there’s a chance it will cure the sickness and my mother who has fallen prey to it.
What I’m not expecting is the feelings he begins to ignite in me, just as the tables turn and I become his prisoner.