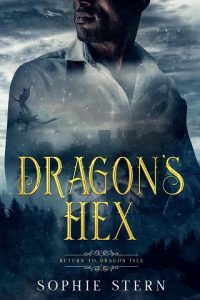 One widower. One bride. One fake marriage.
Colton has lived on his own ever since his wife died tragically. It’s been ten years, and he can’t bring himself to move on. The idea of loving someone new isn’t even on his radar. In fact, every time he tries to start dating again, something happens that makes him realize just how horrible of an idea that really is.

Angel has been hiding on Dragon Isle for months, trying to escape from the hex her sister put on her. The spell makes it terribly difficult for her to do anything at all, yet the only way to break it is for her to fall in love. Angel’s sister thought she was being clever and giving Angel the push she needed to find love, but all she really did was drain all of her energy, and now her life.

The hex was supposed to dissolve after one of the people involved in the spell died. Well, Angel’s sister died weeks ago, and the hex still seems to be strong. It makes it difficult to focus, and the headaches it brings are wildly out of control. The worst part of the hex, though, is that it makes every dragon shifter on the damn island look like a delicious treat.

When Colton walks into the restaurant where she’s been hiding out, Angel realizes that all bets are off.

She needs a dragon.
She needs that dragon. But will jumping into a fake marriage be enough to break the hex?