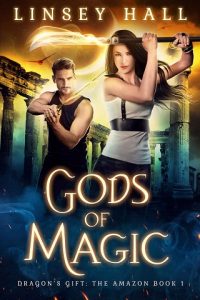 Rules for Living: Lay low. Kick butt. Hide my magic.
People think I’m normal. They’re wrong. I’m demon touched—filled with dark, deadly magic. Hiding my power is the only way to survive. Problem is, I’m about to start my first term at the best Academy of Magic in the world. So hiding is going to be a problem.

When demons attack, the Academy calls on the lethally sexy gladiator Maximus. As the best tracker, I’m forced to work with Maximus to defend our kind. But his mage powers are strong, and he senses there’s something wrong with my magic. He’s powerful as hell, and he wants me. Despite his allure, I can’t let him know the truth of what I am.

My real mission? Kill the demons before they reveal my secret. As for Maximus? It’ll take all my skills to keep my distance, especially since he looks like a god. Because if he learns exactly what I am, I’ll never survive the Academy, much less tomorrow.