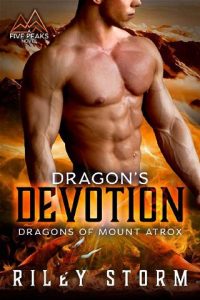 Alana Egall never fit in with her dragon clan or with other humans like her. Caught between two worlds, yet belonging to neither, she’s shocked when her dragon family summons her home. She’s immediately confronted by her stepbrother, a purist jerk, who doesn’t hide his disgust for her heritage. When Klass, the new clan leader, steps in to make her stepbrother leave her alone, she starts to wonder if she might belong with the dragons after all. Kladd’s touch sets her body on fire. But she’s not sure if she’s ready to leave her life behind for him.

Kladd Atrox is the newest leader of his clan, and he’s already having to put out fires on his inauguration night. It’s the first time he’s laid eyes on Alana in over a decade and he can’t believe his eyes. The girl who turned her back on the dragons has become a woman. One he can’t get off his mind. Clan duties or not, he has to see her again, and convince her to return home. His dragon won’t tolerate anything else.

Although she tells herself she’s leaving the dragons behind, Alana knows she’s lying to herself. Her job has her working directly for them, managing their charity fund. It’s an intense job, and she doesn’t have time for distractions. Unfortunately for her, Kladd’s insistence at being a part of her life has made her a target. The vampires haven’t been dormant, and from within their midst, a terrifying new figure has emerged. An evil that threatens to destroy their love before it’s allowed to blossom.