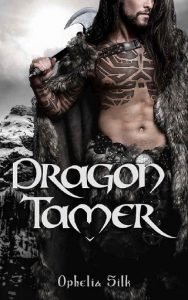 Katla, idiot of idiots, last warrior of Lundr, should know better than to release a dragon.

Sacrificing humans to keep the dragons away may be less bloody than war, but it’s repulsive and cowardly. Real warriors fight their enemies head on. And that’s exactly what Katla intends to do.
Her plans go south when, instead of preventing the sacrifice, she frees a sleeping dragon and is kidnapped to his frozen castle. Between his speed and bestial form, escape would be hard enough. But the dragon is compassionate, too—and nothing slays a lonely warrior faster than a kindhearted grouch.
Soon, Katla is trapped between raging factions of her own heart. Stopping the sacrifices will recommence an age-old war, one she and her peace-loving dragon would wage from opposing sides. Now that they have tamed each other, could they truly go back to being enemies?