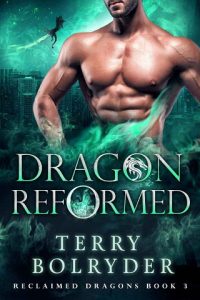 A sexy dragon will use every tool at his disposal to win over the woman of his dreams.

Vex, a notorious rogue fairy, is finally ready to confront the dragon that’s been obsessing over her for months. For some reason, she can’t stop thinking about him either. So even though she knows he’s going to get ideas about love right from the start, she’s willing to play with fire if it means getting her hands on the irresistible man that makes her feel things she’s never felt before.

Vex may think she’s in control of the situation, but Landon isn’t going to go down without a fight. Even if it means going to the woman who is feared by all and pleasuring her senseless. But when he realizes she’s in danger, and not just from the myriad enemies she’s made over the years, Landon sets out to show Vex that she deserves a life better than the one she’s been living for so long.

Even though Landon’s sweet treats and sweet kisses make Vex feel something deeper than ever before, she knows her past left her too broken to ever be in love. But Landon might understand both of their fates better than she thinks, and when danger finally catches up to the notorious fairy, it might just be Landon, and his long-held secrets, that save the day.