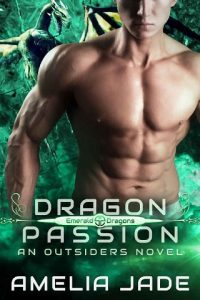 He would do anything for his mate. But who would respect a dragon farmer?

When her family farm falls into Sandy Talbert’s lap, it couldn’t have happened at a better time. Her life in the city was over. She needed a change, and more importantly, she needed the solitude. Running a farm by herself is harder than it seems, and three years later she’s on the verge of being forced to sell to her jerk of a neighbor. The only thing standing between her and defeat is the odd offer made to her by a gorgeous stranger she barely knows.

Palin never expected to find his mate. He was on a mission, assigned to figure out if this war the humans were talking about was truly as serious as they claimed. Knowing how pathetic humans were, he highly doubted it. But an emergency stop for food at a local farmers market has thrown all his plans into disarray. Leaving his comrades behind, he ventures into the world of farms, famine, and intrigue beyond anything he could imagine. She needs his help, but Palin doesn’t know one end of a hoe from the other!

Determined to help her out, Palin agrees to plow her fields. It’s not what Sandy signed up for, but she can’t deny that he’s helpful—and hunky. If she can convince him to stay, she could finally turn a profit and stick it to her nasty neighbor. Can she do that while still maintaining her policy of not letting anyone into her life? And what about her neighbor? How will he react when he finds out his designs on her farm won’t ever come to fruition?