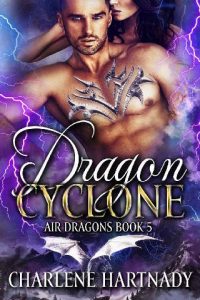 It’s been years since he last saw her. Since he inhaled her scent. Since he held her in his arms. Cyclone made some terrible mistakes. Mistakes that cost him the love of his life. He’s lived with regret ever since.
Now she’s back. Not only that, she’s on dragon soil and will be staying for the foreseeable future. Cyclone has a real chance to fix things. To win her back. Only, she wants nothing to do with him. Good thing he’s persistent and loves the hunt.
Cyclone hurt her a long time ago. He tore her heart out of her chest and ripped it into a million pieces. Angela had to rebuild the organ using reinforced steel. Now it’s like a cold, hard lump in her chest.
Her ex can pursue her all he wants. It’s never going to freaking happen. What he doesn’t seem to be able to get through his thick skull is that Angie is not the person she was before. She’s tough as nails. It’s a pity she’s still so attracted to him, though. Her heart might be hard and brittle, but her body is a different story entirely.