Home
contemporary romance
MM Romance
Down and Out by Parker St. John (ePUB) 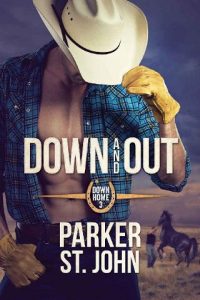 Down and Out (Down Home #3) by Parker St. John – Free eBooks Download

They were once friends…but a dark secret drove them apart.

Nate:
Healer. Savior. Cynic.
The one person Nate could never ignore was Tucker Grace. He’s as cruel as he is gorgeous, with a devastating loneliness in his cold blue eyes.
Nate ditched his hell-raising childhood for the big city and a string of disastrous relationships. He’s a man people rely on, but he’s tired of fixing other people’s problems. So when a family crisis brings him home for the first time in years, the last thing Nate wants is to be drawn to the cruel cowboy he left in the dust.
Tucker is smoke and shadows, fury and calm, and as wild as the horses he tames. He looks at Nate like he craves him.
But Nate knows better than anyone that Tucker isn’t capable of love.
And even if he was…he’s straight.

Tucker:
Villain. Survivor. Cowboy.
The only thing Tucker ever wanted was Nate Silva, so he drove him away. Hard.
He never expected he’d come back.
Tucker has spent years clawing his way up from nothing. Ranch life taught him to control his savage temper, and his talent for breaking untamable horses earned him respect. He’s found peace.
Nate’s return threatens all that.

When a traumatized stallion forces them together, Tucker’s tightly reined control starts to fray. Nate’s soft eyes and softer mouth stir a lust that threatens everything Tucker has built.
Everything in him wants to claim Nate as his own…but dark secrets lurk in Tucker’s past.
He can’t trust himself with something as fragile as another man’s heart.
Even if it breaks his own.