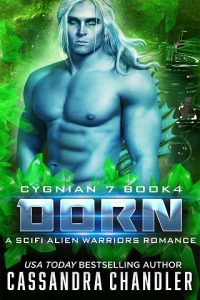 He will win her heart—if she’ll just stop trying to kill him.

Amy Myers has dedicated herself to learning everything she needs to become a field agent and protect people. Martial arts, weapons training, strategy, whatever it takes. She will achieve her objective, despite her family’s objections. Discovering that her entire planet needs to be protected from hostile aliens after she’s nearly killed during an abduction attempt changes her plans—especially when the giant blue alien who took her from Earth claims her as his soulmate.
Before he even met Amy, Dorn nearly lost his newly found soulmate in a brutal attack by the Tau Centauran Assembly. When he touched her broken body, he realized she was his. Their bond should draw her to him like the pull of a gravity well, but she’s convinced that he and his fellow Cygnian Warriors have abducted her and her sisters, and were behind the attack that nearly cost her life.
Dorn knows the true enemy hasn’t stopped his deadly pursuit of the Myers sisters. The malevolent shape-shifting alien chasing them is still out there, and he will do whatever is necessary to obtain his new target—Amy. Can Dorn convince Amy that they are meant to be together or will he lose her forever?