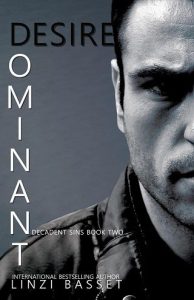 As an ex professional football player, and now the new owner of the Seattle Sharks, Matteo Caruso stood at a crossroads. Living a double life as a sport star as well as being the advisor to the Boss of The Mafia Commission, had been easy to juggle. Managing an all stars club however, brought new challenges. He wasn’t fazed since he loved living on the edge. All he needed to do was make a couple of adjustments. Easier said than done!

Jamari Hunter, daughter of the previous owner of the Seattle Sharks, was fast becoming a headache he could do well without, since she refused to accept the loss of her position as the CEO of the team. Unlucky for her, he recognized her at a masked auction at the Decadent Sin’s club. True to his Dominant desires, Master Hercules taught her a lesson in submission that changed her entire view of the irritating football player who had taken away her birthright.

Now, he had her in the palm of his hand and tightened the ropes with every meeting … except he hadn’t banked on her getting under his skin! The interference of a Colombian Mafia and a local drug cartel in family business put a strain on their tremulous relationship while Matteo’s ability to keep her safe was viciously put to the test.