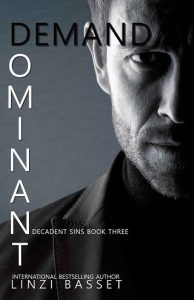 Razor, aka Maxim Ivanov, the newly promoted Boss of the National Crime Syndicate, Kings Inc, was known in the crime world as a cold-blooded bastard, an assassin with no heart.
Born to the world of violence and crime, Razor embraced his destiny. The path of his future had been set and over time, he became the embodiment of death… in all its forms.
Love didn’t feature in his life… sex, well, that was an entirely different concept. Indulging in kink was his favorite pastime, and when the sassy socialite propositioned him at the Decadent Sins Club, he proved why she should rather have run in the opposite direction.
Maia Wilson had been eyeing the brooding Russian from the first time she entered the club. That he was the friend of her bestie’s fiancé, placed him right where she wanted him… within her grasp.
Except he was so much more Dominant than she thought she could handle. Soon, she became the object of her own mystery… and his enjoyment.
When Razor found out who was behind usurping the Mafia’s power in the U.S.; he was forced back to Moscow… to face off against a man he hated with passion… the one who had turned his heart completely black.