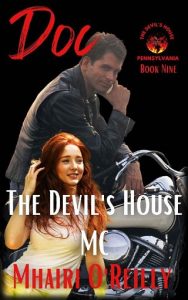 Doc
Kenny ‘Doc’ Anderson had thought he had it all, great career, brotherhood, money, and plenty of women to warm his bed. Until one night changed everything for Kenny, he no longer saw his life the same way; worse, what he saw wasn’t something he liked. So, he gave up his current life and roamed for a year before returning to The Devil’s House MC. But Kenny wasn’t the same man who left; no, this Kenny would never let anyone close to him again, and he would never allow himself to feel that kind of pain ever again. But then she showed up, Grace King, this bright ray of sunshine living next door to him, and then when he discovered who she was, it became impossible to ignore the red-haired spitfire who had captured his attention, but he could never let have his heart.

Grace
Grace King learned long ago that fairy tales are just what they are meant to be, make-believe. She never fooled herself into thinking she would ever have a happily ever after with a man, watching her parents solved that young dream. But the one thing she did believe was that life was to be lived and lived by her rules. She was determined to be happy, kind, and always there for those that needed her. So, when her brother asked her to come to help Tildie, she agreed. But she also needed to get out of town for a while; things were happening that scared Grace. So, here she is back in Hope Chapel and living next door to Kenny Anderson, a rude, uptight, and very closed-off man, and did I mention extremely good-looking? Grace feels an instant connection with this dark, brooding man, but she has to fight it because her heart will never belong to any man.