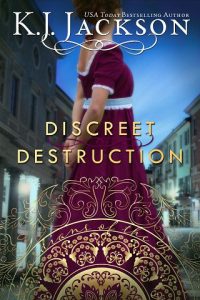 A wayward ruler of the London underworld. The woman determined to protect him at all costs. Where betrayal and obsession meet, does love stand a chance in this adventure-filled historical romance?

He’s oblivious to the danger bearing down on him.
A titan of the rookeries, the last thing Declan Rudderton needs in his life is another thing to worry about. He has multiple gaming hells and his ever-expanding London empire that he has to manage. And it seems, as of late, he’s been bothered by the occasional alleyway knife-fight far too often. Yet he pushes forth, holding on—barely—until the day he discovers the maid he depends on to run everything around him isn’t anything he thought she was. She’s more—too much more. A betrayal—and temptation—like no other.

She’s been lying for years.
Verity Jones has been playing as a mute for years, working as a maid in the most lucrative gaming hell in the rookeries, all to get close to Declan, for it is her job as a guardian to ensure he is safe. She keeps him close, keeps him alive. A ruse that works to her advantage in every way, until the day Declan discovers she can speak. And read. And write. And was hired to be in life.

Her job—and life—is on the line.
Never mind that she fell in love with Declan long ago, Verity desperately needs this employ and cannot afford to lose it. Even though she destroyed every bit of trust Declan had in her and he now despises her, there is the matter of someone working hard to make sure Declan doesn’t see another sunrise. She swore to protect him and needs to uncover the threat, or she won’t just lose her job—she’ll lose the one person she would die for.