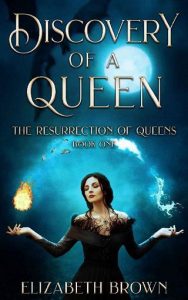 My sisters have been in a magical slumber for centuries, my mother, the last great battle queen is dead, leaving me to face the world alone. I’m the last of my kind. A queen, not entirely shifter and not entirely witch but a perfect blend of both. I’ve been living in hiding for over four hundred years, avoiding ties with the supernatural community, specifically the Council and the Alpha of all alphas, like the plague. That is, until I find myself challenging for alpha of the New England pack in front of both the shifter and witch communities. Now, I’m the leader of both. Fuck, I’m the leader of both. I’ve put myself square in the Council’s sight, my time in hiding forcibly over.

But the Council is the least of my problems. Malick, the oldest Archdemon to walk the earth, is still alive despite my mother’s best efforts. His legion growing in number by the day. I may want to keep myself and my new community away from his legion, but I know that the only way we’ll ever be safe is to kill him.
Countless queens have tried. All of them failing even with their alpha dragon mates and supernatural communities.
I’m going to have to work with the Alpha, Caleb, and the Council if I want to end Malick and wipe out his legion for good. Unfortunately, Caleb also happens to be my mate, as in soulmate, together forever, never to be parted, partners in crime. I know that he won’t let me go after we’ve finished wiping Malick from the face of the earth. But I refuse to be subject to the Council’s control.

I also need to find a way to wake my sisters because what’s coming for us is far worse than Malick and there are no guarantees there will be any survivors.