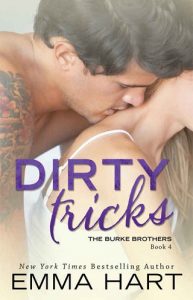 The sexiest, most mysterious Burke brother of all peels back his stage persona to reveal the real man—and the rock-hard body—behind the rockstar in the banging fourth book from New York Times bestselling author Emma Hart’s hot new adult series that began with Dirty Past, Dirty Secret, and Dirty Lies.

After witnessing an endless string of late nights, long tours, and eager groupies her world-famous father could never resist, Chelsey Young knows the dirty truth behind the glamorous façade of the rockstar life. Which is exactly why she takes hot as hell guitarist Kye Burke to bed when he decides he wants her.

One night. That’s how rockstars roll.

Unless your name is Kye Burke. The quietest of all his brothers, Kye’s style has never really been pumping and dumping, so pursuing Chelsey isn’t a hard choice for him. The hard part is keeping hold of the girl who’s hotter than the Sahara one minute then so cold even Antarctica wouldn’t touch her the next…despite the fact that they can’t stay away from each other.

The fact that he’s about to leave for L.A. to record the newest Dirty B. album doesn’t work in his favor, either. A long-distance relationship is the reason Chelsey’s parents divorced, and she’s sworn them off. Completely. Forever. No way.

Kye has two weeks to prove to Chelsey that he isn’t the kind of man her father is. She has two weeks to convince him that it’s never going to happen. But Kye didn’t get where he is by giving up…and even if it’s the fight of his life, there’s no way he’s giving Chelsey up.