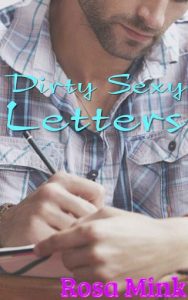 Kaylie thinks nothing of sending a letter to an unknown soldier stationed overseas through an outreach program, at least, not until she’s handed back the second page of that letter from the guy she’s been eyeing around her school. At eighteen, she knows the only way out of the house is by marrying someone, and that is likely only going to happen one way…getting pregnant.

To try to stir up his interest she wrote a letter, but after two weeks of wondering she’s finally learnt why he hasn’t responded in any sort of way – she gave him the wrong letter. Completely mortified for her inner most thoughts, the base longings she’s worked up in herself to be floating around with some stranger, she’s shocked to find a letter for her waiting at home. Her unknown soldier isn’t looking to stay unknown and soon, she’s learning just how deep her desires can go.

Matt’s spent years looking after himself. Cut off from his wealthy family for choosing the army over business, he’s looking at life in the ranks. It’s something that’s not at all a tough choice for him until a slightly sexy little letter falls into his hands. The softly sensual words instantly stir up his interest and he can’t stop from replying to his new little pen pal.

The moment he learns that Kaylie’s looking for a way out of home, anyway necessary, he knows she’s meant to be his. Thousands of miles may separate them right now, but he’s not about to let anyone else turn her head, especially not once he’s finally seen a picture of her. Gorgeous doesn’t begin to cut it and now, beyond his duty, his mind’s fully on pulling every need, every unknown desire from his girl so he can make it a reality once he’s gotten her in his arms.

With ten sisters and her mom pregnant again, Kaylie’s desperate for Matt to get home and help her escape. She never thought she’d fall in love but the soldier she’s grown to know through their letters has stolen every part of her heart, and she hopes when they meet, he’ll feel the same.

Will she be able to find a happily ever after or will it turn out like her two oldest sister’s hasty marriages to escape their father’s controlling ways? And what will happen when she tells Matt her biggest reason why she was desperate enough to get pregnant to escape home? With her sisters’ help she’s about to find out, and the outcome, is one she never expected.