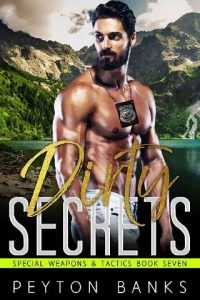 A forbidden night of passion. She’s his weakness, but he’ll risk it all when it comes to her safety.

Zain Roman had sworn off women. Now a bitter divorcé, he no longer believed in the sanctity of marriage. Zain was only interested in having fun, with no strings attached. He was committed to his job in policing the streets and taking down bad guys as a member of the finest SWAT team in the state.
He loved his team, and when he lost a bet, he was man enough to pay up.
Salon owner Omara Knight knew she was playing with fire. One look at the officer sitting in her chair, and she knew she was intrigued. Omara had no time for a love life. She had a business to run and a son to raise.
Zain was a temptation she should avoid. Her sister warned her about him, but Omara never did as she was told.
There was something about a man in uniform that had her wanting to indulge in the sexy pleasures his eyes promised. One night was all she needed.
At least that’s what she tried to tell herself.
Zain sensed Omara was hiding something, and when her past came back for her, he’s willing to do everything in his power to keep her safe—even give her his heart, but will it be too late?