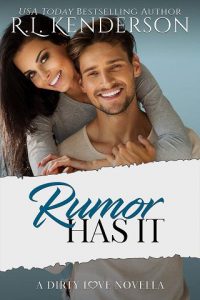 Sometimes rumors are just rumors. But sometimes they’re true.
Rachel Garwood is attracted to Sean from the moment she sees him. Even if she doesn’t want to be. He isn’t her type, but there is just something about him.
When he invites her to a house party, she hears a rumor about him. And now, she needs to know if it’s true.
Sean King isn’t like most other college guys. He loves to pleasure his partners, and the stories have spread across the campus.
When Rachel confronts him in his bedroom, he has to make a decision. Does he turn her away or show her the rumors are true?

She’s unable to resist him…
After returning home due to her father’s illness, Elise Phillips reunites with her college friends, including Luke Long. Luke was a player back then, and Elise had always prided herself on not being another notch on his bedpost.
Luke is still gorgeous though, and he knows it. And he checks all her boxes—intelligent and sexy with muscles and a hard body.
Following a night of beer and shots, her resistance runs out, and he finally does check her box. And Elise knows that it can never happen again.
Luke had always thought of Elise as the pretty girl that was friends with his roommate’s girlfriend, but now she’s all grown up. When their night of passion rocks Luke’s world he realizes he must have her again.
The two enter a friends-with-benefits relationship with the agreement that they’re just going to have fun.
But all that changes when Luke steps in to help Elise, and now the player she avoided is the person she doesn’t want to live without.

One-Night Stand is a story about what happened between chapters Two and Three of Friends with Benefits.

He doesn’t do commitment. She’s his dead friend’s wife. They can never be more than friends.
Piper Stevens had already met—and lost—the love of her life. When she buried her husband, she buried her chance for a happily ever after…but also found a shoulder to lean on in Nate.
As a commitment-phobe womanizer, Nate Hall has never had a female as a friend, but he made a promise to his buddy before he passed. Take care of Piper.
And these days? He can’t imagine his life without her.
Now, a year later, things Piper thought were long gone are beginning to come back.
Like her previously healthy libido.
Except she can’t picture dating someone in her husband’s place, nor can she sleep with a stranger either.
So, she turns to Nate. After all, he’s the perfect choice. He’s her friend but also a player. He cares about her but they’ll never fall in love…and she won’t get hurt. Not like she did when she lost her husband.
But sometimes the universe has other plans. Like bringing together two people who were meant to be together.

Sleeping with his friend’s little sister is probably off-limits. Getting her pregnant definitely is.
Tiana Hall has plans. She’s going to go to grad school, get a great job, and then find a man and start a family.
Ty Morgan leads a great bachelor life. He has a good job, a nice home, and the freedom to do whatever he wants.
So, the two of them are on the same page when it comes to an evening of hot sex at her brother’s wedding. One night. No commitments. Simple…as long as her brother doesn’t find out.
Except this one night is about to turn into the biggest commitment of all. And there’s nothing simple about telling your friend you knocked up his sister.
Relationship status: It’s Complicated.