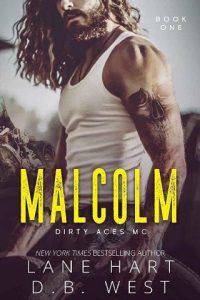 Go for a ride with the bad boys of the Dirty Aces MC!

~ Malcolm ~
While Malcolm Hyde may look like your very own personal Jesus, he’s anything but a saint. Covered in tattoos and leather, he’s a smoking hot biker and nothing but trouble.
As the president of the Dirty Aces MC, Malcolm is known for being cold and calculating. One bad decision – getting into business with the wrong person – is all it takes to bring down the entire MC. It’s happened before to his predecessor, which is why Malcolm refuses to let it happen again on his watch. He doesn’t trust anyone except for the few men who wear the same ace of spades patch on their back.

And that’s exactly why he doesn’t ever take his eyes off of me – the new girl. I never intended to make an enemy out of Malcolm or the MC when I was sent to steal everything I could from them.
After Malcolm finds out what I’ve been doing, he’s furious and shows no mercy until I spill all of my secrets, ones that could very well end my life. That’s when he makes me a surprising offer – he’s willing to take care of all of my problems, and the only thing he’s asking for in return is for me to completely surrender myself to him.
Spending two weeks in bed with a bad boy biker sounds more like a reward than a punishment.
There’s just one little catch – once he claims my body, there’s no guarantee he won’t steal my heart too.

~ Devlin ~
As one of the enforcers for the Dirty Aces, sometimes I have to hurt people. Using my fists to get results is not something I enjoy – it’s just part of the job. My loyalty will always be to the MC and no one else.
So just because Jetta James is a hot as hell girl I once hooked up with at a rock concert, it doesn’t mean I can give her brother a break on the gambling debt he owes to the Aces.

When Jetta finds out I’m a member of the MC, she thinks I’m bad news; but her brother Sean is the one drowning in his bad decisions.
And the day Sean makes a stupid deal that puts Jetta’s life in danger, I’ll beat, maim, and kill every asshole who stands in my way in order to save her, even her own brother.

~ Nash ~
Whenever Nash Kincaid looks in the mirror, he only sees a monster who ruins lives. Thanks to his involvement with the Dirty Aces MC, there’s so much blood on his hands he’ll never wash them clean again. Violence is just part of the outlaw lifestyle. That’s why he’s not all that surprised when he’s hit with divorce papers three years after his wife walked out on him.
The last thing Nash needs right now is a nosy new neighbor who refuses to leave him alone. If Lucy knew Nash’s dark secrets, he’s certain that she would run the other way rather than try her best to get into his bed. Thanks to a failed marriage, he knows he can never be the man Lucy needs him to be, not while he’s a member of the MC with a life sentence hanging over his head.

Lucy Stafford didn’t survive cancer and a cheating boyfriend just to give up on finding happiness. Her only plan for the future is to live each and every day to the fullest by helping others. Not even the grumpy biker who lives upstairs can bring her down, no matter how hard he tries. Lucy made a deal with the devil. So if she wants to stay out of trouble, she’ll have to get on Nash’s good side – if she can find it.
Nash convinces himself that the only thing he has in common with Lucy is a broken heart. He refuses to let himself fall for her, only to eventually hurt her or have her bail when his past crimes comes crashing down on him.
But Lucy has a few secrets of her own – secrets that she hopes will finally prove to Nash that she’s tougher than she looks.