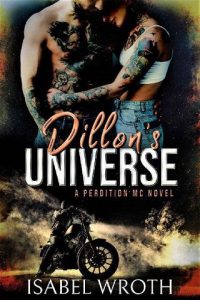 Blue Oyster Cult is playing on the radio as Dillon enters the lair of bikers, and she can’t help but look around for the shadow of death that invaded her home and sent her racing to Austin. Every letter written by that specter, that reaper on her flesh, burns like the kiss of liquid nitrogen. A warning she’s forced to hand-deliver to some guy named Nasa.

As soon as she drives through the gates, Nasa has her on his camera feed. There’s no reason for her to be here, and his first instinct to seeing this gorgeous woman wearing a bulky sweatshirt in the middle of summer is to call the bomb squad.
To the shock of every member of Perdition, it’s not a vest packed with C4 she’s got under there. It’s a message scrawled across her chest in black ink, and the meaning is clear.
Ghost is back.

Nasa’s reaction to Dillon is visceral, a connection formed the instant she turned her wild tiger eyes his way. She has him wrestling between what he knows to be true, and the burning desire to claim her as his own.
The facts can’t be ignored, and he has to decide whether or not Dillon is a victim in need of his protection or another one of Ghost’s minions here to destroy Perdition.