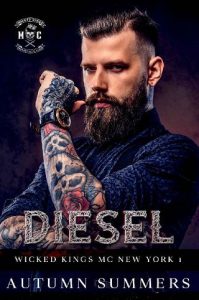 Diesel:
I was on the path to destruction and my whole world was crumbling around me, the only family I knew was gone in the blink of an eye, that is until the Wicked Kings MC took me in.
They took care of me when the rest of the world turned their backs on me.
I owed my life to the MC.
But, when they brought her in, everything changed.
Even though she was the enemy, I wanted her hot, sexy body badly!
Once I had a taste, she drew me deeper into her web…
I don’t know what it was about this woman, but she has me risking my loyalty to the MC.

Karma:
I can’t believe the Wicked Kings had the balls to snatch me up!
But, Daddy didn’t raise no fool, the minute I saw that salivating Prospect, I knew he was my ticket out.
Yeah, I gave him what he wanted and bound him to my spell.
I won’t lie, I definitely enjoyed him.
I may have felt a deeper connection, but I had to get out of there at any cost.
That is until I realized that Daddy threw me to the wolves, as he did with Mom.
That’s when I became hell-bent on helping the Wicked Kings take down my father’s MC, the Sinful Souls.