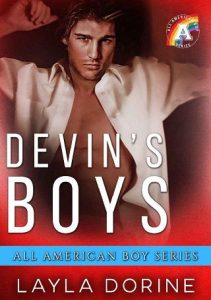 Coming home was supposed to be the end of something, until Mikal barreled into his life….and he wasn’t alone.
For Devin McKay, music has been his lover, his drug, and his best friend for as long as he can remember, but there was always something he denied himself while he pursued it. Now that his band has broken up and he’s returned to his hometown of Stoney Brook, he’s settled into a new, somewhat drunken routine, while he tries to get accustomed to this new phase in his life. The last thing he expected was an old friend to send a troubled young musician his way.
Mikal needs help, or rather, his best friend, Moon, needs help getting over the blinding bouts of stage fright that have been plaguing him for the last year. He’ll do anything to get to the root of Moon’s issues, even follow along with the unorthodox methods Devin prescribes for them. After all, Devin was a success in the industry, while Mikal and Moon have been struggling to get a foot in the door.
They aren’t the only ones struggling. Moon’s longtime friend with benefits, Derrick, spends most days rudderless and pretending to be okay. There are things he needs that Moon tries desperately to give him, but Moon has needs too. All their pieces have jagged edges, but with a little twisting and turning, and a lot of songs, they might discover a way they can all fit.