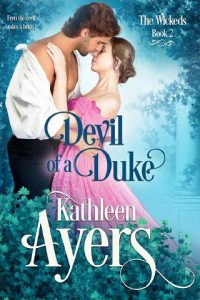 Jemma Manning is not like most young ladies. She’s reckless. Opinionated. Eccentric. Her father has very firm ideas about her behavior. Stop wearing breeches. Don’t carry a brace of pistols on your person. Be demure. Fortunately for Nick Shepherd, Jemma does none of those things.

A mysterious stranger.
When she comes to the aid of Mr. Shepherd, Jemma soon regrets her charity. The man is rude. Arrogant. And a fortune hunter. Jemma finds her attraction to him unwarranted especially since he’s not at all appreciative that she’s rescued him from certain death.

Nick’s life was never in danger and he certainly didn’t need rescuing from some snippy boy named Jem. At least Nick thinks his savior was a boy. The bloody eye-patch he’s forced to wear impacts his sight. And the piece of leather itches in the heat. He hates Bermuda. The damned place is full of intrigue and mosquitoes. The sooner he sniffs out the man he’s searching for, the better.

When Nick meets his savior again, she’s wearing a dress and nearly betrothed to the Lord Governor’s son. Jemma is reckless and defiant with a wild nature that matches his own. The passion between them is undeniable. When he leaves Bermuda, he’s taking Jemma with him. She won’t go quietly. Kidnapping seems the most viable option.

Nick has finally found the thing he loves most, but will he destroy Jemma for the sake of revenge?