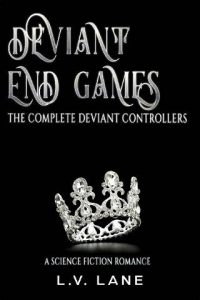 Contains all four Deviant books from the Controllers series!
With her father on the ruling council, Doctor Lillian Brach had lived a coveted life.
Rising to Director of the viral research program, she had carved a place for herself within the Empire.

But her life plans changed the day she revealed as an Omega.
Her former research partner, Erison Tsing, has assumed control of the program. Her singularity (unique Omega gift) brings more challenges than benefits. And Tsing’s methods of testing her gift stamp over moral and ethical boundaries.

Secretly suppressing her heat, and clinging to a measure of independence unheard of for an Omega, her life is precarious enough.
But when the viral research center comes under attack, she makes some questionable decisions.
Her escort soldier has been shot… by her hand… she was trying to save his life.
Now she is trapped outside the safe zone, and enemy soldiers are closing in.
Her father promised she would never be allocated a Controller. But that’s about to change.
Publisher’s Note: The Controllers is an action-packed, dark romance series with a unique take on the Omegaverse genre.