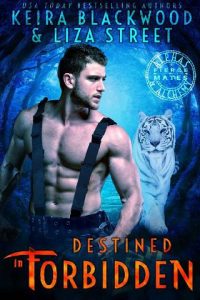 Living the #badgerlife includes free tacos, new besties, and a walk-on role in a firefighter calendar shoot.
Weasels are terrible. Unwanted weasel fiances are worse. Magic ensures shapeshifter Natalie won’t be found by her betrothed as long as she remains in her honey badger form. But her cover is blown when she shifts in a hot firefighter’s bathroom and he emerges from the shower to find her standing there–very human, very curvy, and very naked.

After his years-long stint as a pie-stealing vulture, tiger shifter Grant is free of his curse. No one understands what he’s been through, or what it’s like to be trapped in a body that doesn’t belong to them. Until a roly poly honey badger climbs through his window. She’s on the run and she’s just as lost as Grant, and he’ll do anything to keep her safe.

Destined in Forbidden is the seventh stand-alone book in the Alphas & Alchemy: Fierce Mates series. Do you love hot alphas, feisty heroines, and steamy love scenes? Of course you do. 😉 Get Destined in Forbidden for a hilarious, suspenseful shifter story you won’t want to put down!